About the NFURA:  The Niagara Falls Urban Renewal Agency was established in 1964 under General Municipal Law §593.

Its original and continuing mission is to contribute to the revitalization the City of Niagara Falls generally and to more specifically, eliminate blight, and revitalize and redevelop those properties within the established Urban Renewal District.

The Agency was formed for the purposes specified in General Municipal Law Article 15 and 15-A, and has the powers and duties conferred by those Articles.  A 10-member Board of Directors, whose members include the Mayor and Councilmembers of the City of Niagara Falls, and 4 private sector members selected by the Mayor and approved by City Council, governs the NFURA.  NFURA is a partner with the City of Niagara Falls in organizing, implementing and facilitating the promotion, design and economic growth of the City generally, and within the established renewal districts more specifically.

In 2009, after the expiration of several legacy urban renewal plans and the adoption of a new municipal comprehensive plan, NFURA undertook planning that could advance the goals identified in the Comprehensive Plan through its urban renewal mission to correct and/or prevent further deterioration and blight while encouraging and facilitating revitalization activities in the most appropriate ways. The City and the Agency approved the Niagara Falls Core City Urban Renewal Plan, which re-established the Agency as the primary mechanism for carrying out urban renewal activities within the established urban renewal areas.

In 2011, NFURA further refined the actions necessary to achieve the development goals and objectives contained in the City’s Comprehensive and Core City Urban Renewal Plans by developing a strategic plan for the Urban Renewal Sub-Area, more commonly referred to as the Downtown or South End “Gateway Area.”

Entering 2020, a new era for development in the City of Niagara Falls, NY has arrived.  The city’s landscape is changing dramatically for the better.  Niagara Falls is investing in game-changing projects that will enhance the development market of the city.  Today, the City and State are completing the removal of more than 3 miles of highway along the Niagara River. This is a once-in-a-generation project that will return neighborhoods, commercial districts and the visitor community to the water and truly re-establish Niagara Falls as the ‘City in a Park.’

In 2019, the City of Niagara Falls and NFURA designated the South End Downtown Gateway District as an urban renewal and strategic investment area and it released Developing Niagara Falls 2020, a prospectus on the opportunities for new investment throughout the city, aiming to attract new projects from local, national and international development companies.

Developing in Niagara Falls in 2020 and beyond will depend in large part on the relative success of the NFURA in its implementation of its Gateway District Redevelopment Strategy, which calls for focusing planning attention, resources and the marketing of sites, buildings and blocks along the Niagara Street and including renewal areas north and west of the downtown tourism district. 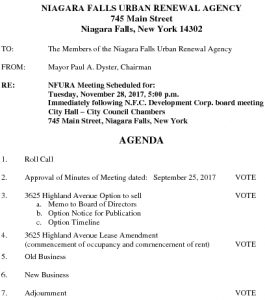