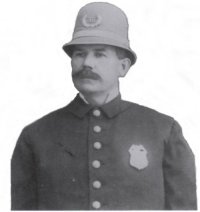 On July 22, 1908 Patrolman Michael McCormick, a ten year veteran, was working the Falls street posts along with Patrolman John Magner. Around midnight a report was received “that a bad looking stranger carrying a Colt’s .44ging about one of the brothels (Niagara Falls Gazette, July 22, 1908.)” Magner was the first to respond. McCormick, who was eating his lunch “quickly finished eating and set off down Falls Street (Gazette, 1908.)” McCormick heard a shot and ran into Main Street. He saw that Magner had been shot in the leg. McCormick grabbed the suspect who turned and fired. The bullet struck McCormick’s left leg, Magner was able to draw his service revolver and fire three shots at the suspect “but not a cartridge exploded (Gazette. 1908.)” The suspect fled into the (Niagara) Reservation. McCormick was taken to hospital where he died at 2:15 o’clock. The cause of death was a severed femoral artery. McCormick was 45 years old. McCormick was survived by his wife Katherine (McWilliams) McCormick, his son William, his mother Elizabeth, a sister and four brothers. Magner was able to recover from his wound while, after an extensive investigation, the gunman was never captured,

Rookie Patrolman John Ratkey was gunned down in front of 135-11th street, on October 10, 1917. He had been assigned to a special detail aimed at eliminating “Disorderly Houses” which had been operating in this area for some time. The suspect, who was a target of the police cleanup, was arrested a few hours later at a house on 20th Street. Officer Ratkey was married and had been 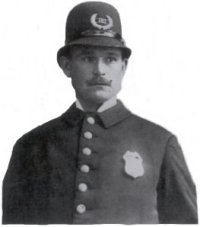 On August 3, 1923, Fifty nine year old John Downs was shot and killed while attempting to arrest a confidence man at Quay Street and Jefferson Avenue. The shooting occured after a lengthy foot chase which began on the State Reservation. It is believed that the sixteen year veteran was shot with his own weapon. The suspect was arrested and convicted. Detective Sgt. Downs was born in Ireland and was survived by his wife.

Fifty-three year old John Stenzel was killed while on foot patrol in the 400 block of 3rd street on January 6, 1941. Officer Stenzel had been checking doors in the alley behind the businesses just after 1:00 AM when he shook the door handle at the rear of Freddies Donut Shop. The manager and an employee of the business awakened. They mistook the officer for a burglar and both opened fire, killing him. Both men were charged in connection with the death. Officer Stenzel was married and among his survivors was his son, Russell, who had been appointed patrolman in 1939