Be Counted In the Census
Western New York Residents Encouraged to be Counted in the Census Local Response Rates Are Down, Accurate Count Critical to WNY Receiving its Fair Share
Congressman Brian Higgins (NY-26), City of Niagara Falls Mayor Robert Restaino and Reverend Craig Pridgen, Senior Pastor and True Bethel Baptist Church and President of the Niagara Ministerial Council are teaming up to share information about the Census and stress how important it is for residents to be counted. 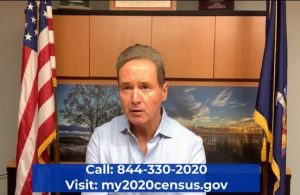 Every 10 years the federal government conducts a Census to count the number of people living in the United States.  The Census Bureau’s 2020 outreach began in March with residents receiving questionnaires by mail. The questionnaire consists of just nine questions requesting basic information and can be completed online, over the phone or by mail. Responses are kept private and the data is used to determine equal representation and fair distribution of federal resources.
Congressman Higgins said, “Achieving an accurate Census count is critical for our families and communities.  It plays a role in determining health care, transportation, education, affordable housing and much more.  Full participation today will determine the resources provided to our community for the next decade.”